improv classes & shows
* for all ages

Over the past decade, we have scoured the bedrooms of this sleepy neighborhood for closet improvisers - people with a penchant for play in between commutes to their workplaces during the day.

Holding their craziness inside for 8-12 hours a day in the "real world", these vampires of the stage come out at night, incisors flashing.

ST!C is made up of software engineers, seedy consultants, voyeuristic therapists, retired firemen, old men and hot women plus a broad swath of other representatives of the lunatic fringe.

None of us are pros - but we are poetry in improv! 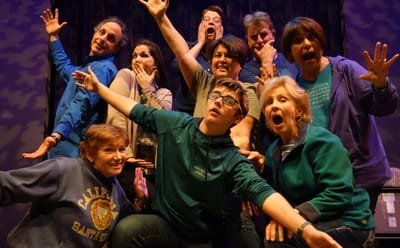 Want to keep up with ST!C?

We will never sell your email address and will only send you reminders about our upcoming shows and classes.

SNL hits improv on the head! 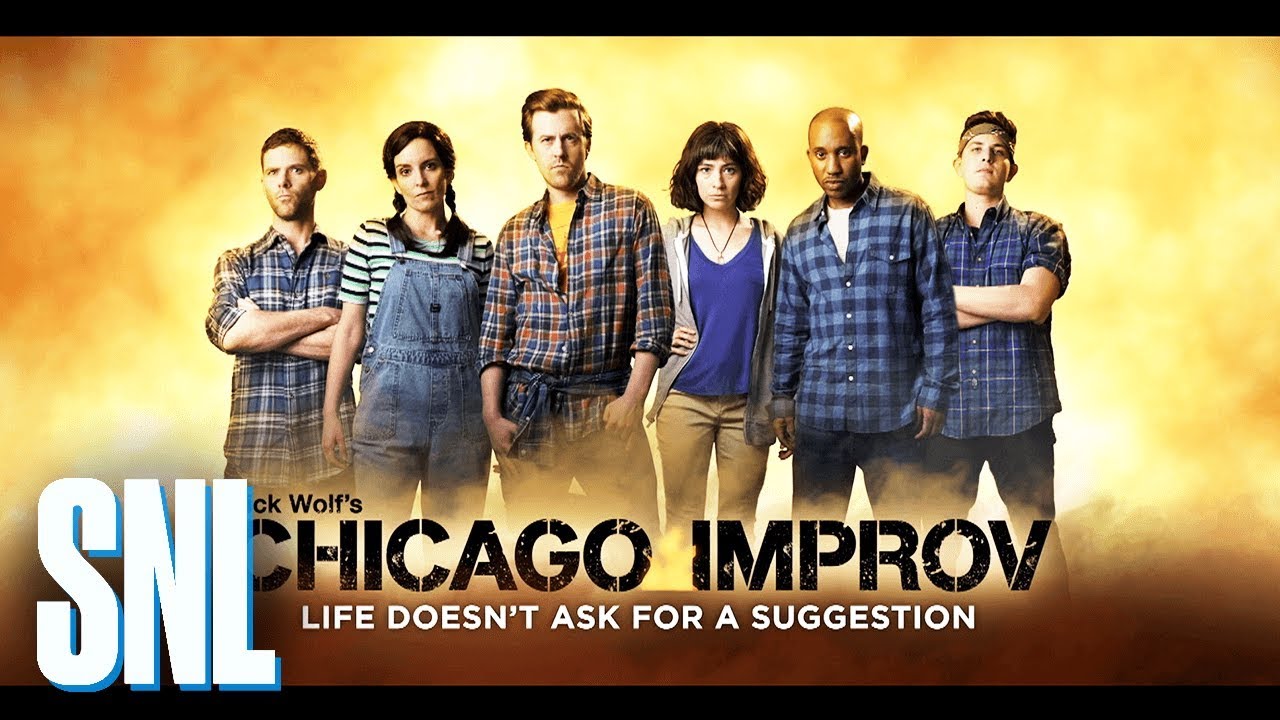 END_OF_DOCUMENT_TOKEN_TO_BE_REPLACED

Corrinne is a renaissance woman with many hidden talents! She is currently writing two books!

END_OF_DOCUMENT_TOKEN_TO_BE_REPLACED

Josh is a giant space salamander who wanders the cosmos in search of love. In his human form, he performs with the Suburban Thunder Improv Teens.

Rylen loves improv because he likes stage acting and always likes putting on a show. He’s a gamer.

Diana is an amazing mom of adult Triplets! She has recently relocated to Sacramento where she is working on and performing stand up!

END_OF_DOCUMENT_TOKEN_TO_BE_REPLACED

Michael recently had the great opportunity to move on to a new chapter in his story.

END_OF_DOCUMENT_TOKEN_TO_BE_REPLACED

Mike created our Suburban Thunder Improv Company logo and performs with ST!C when he needs a dose of laughter! 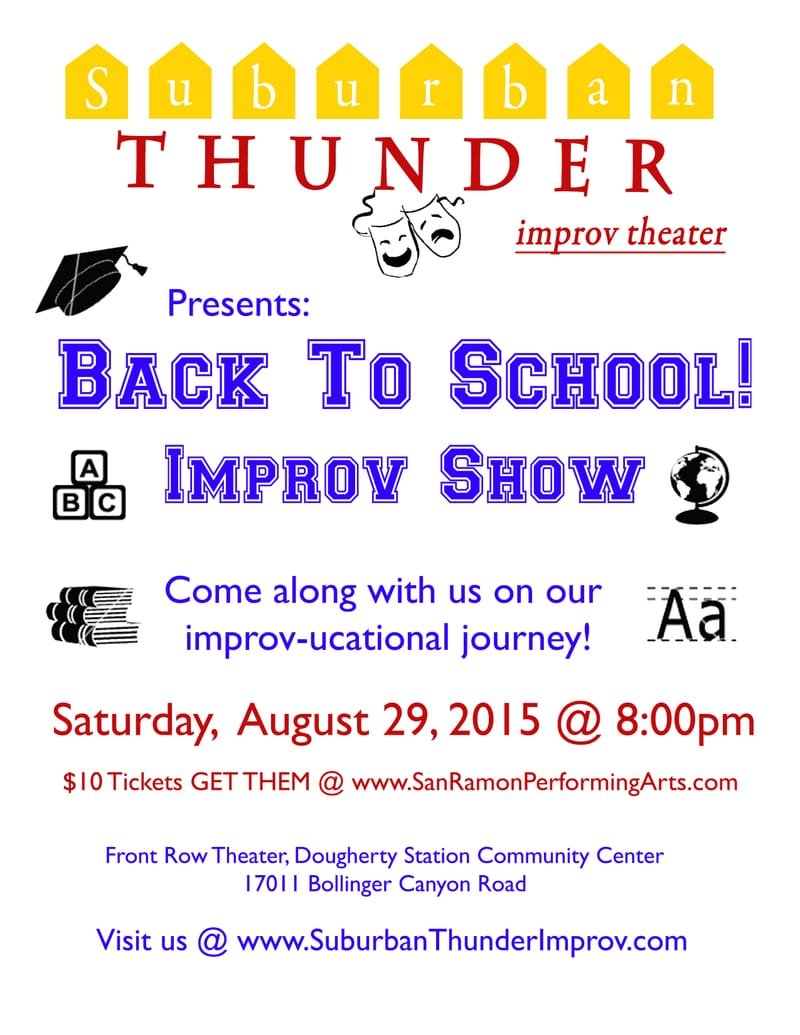 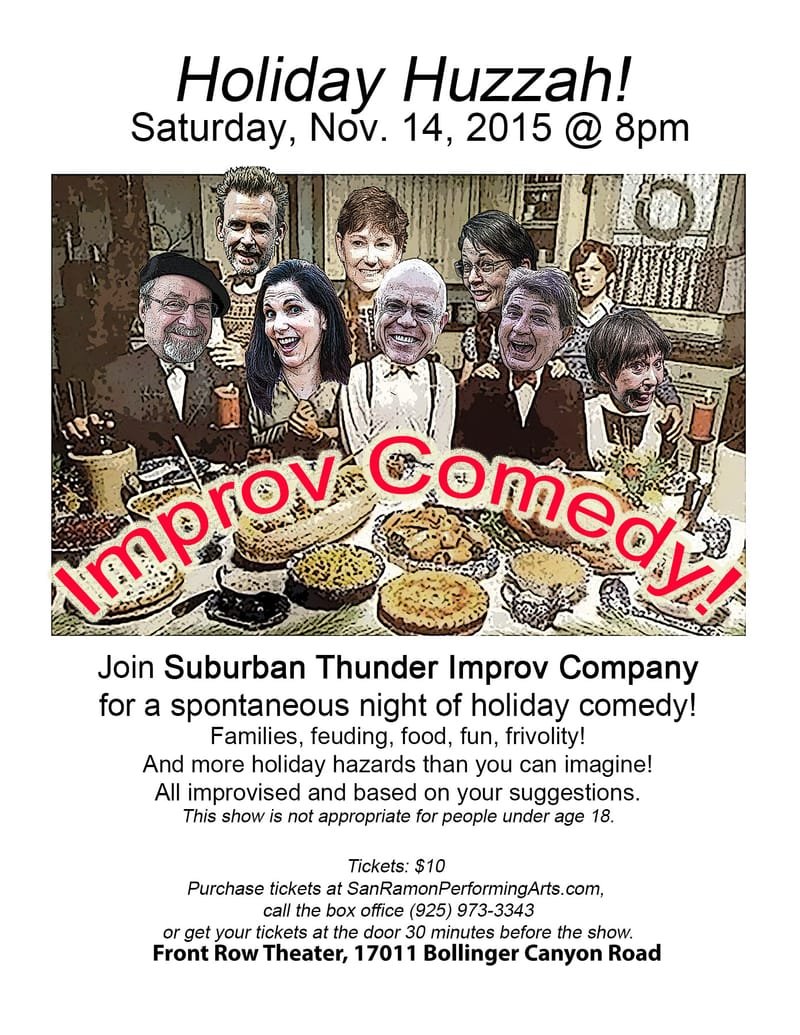 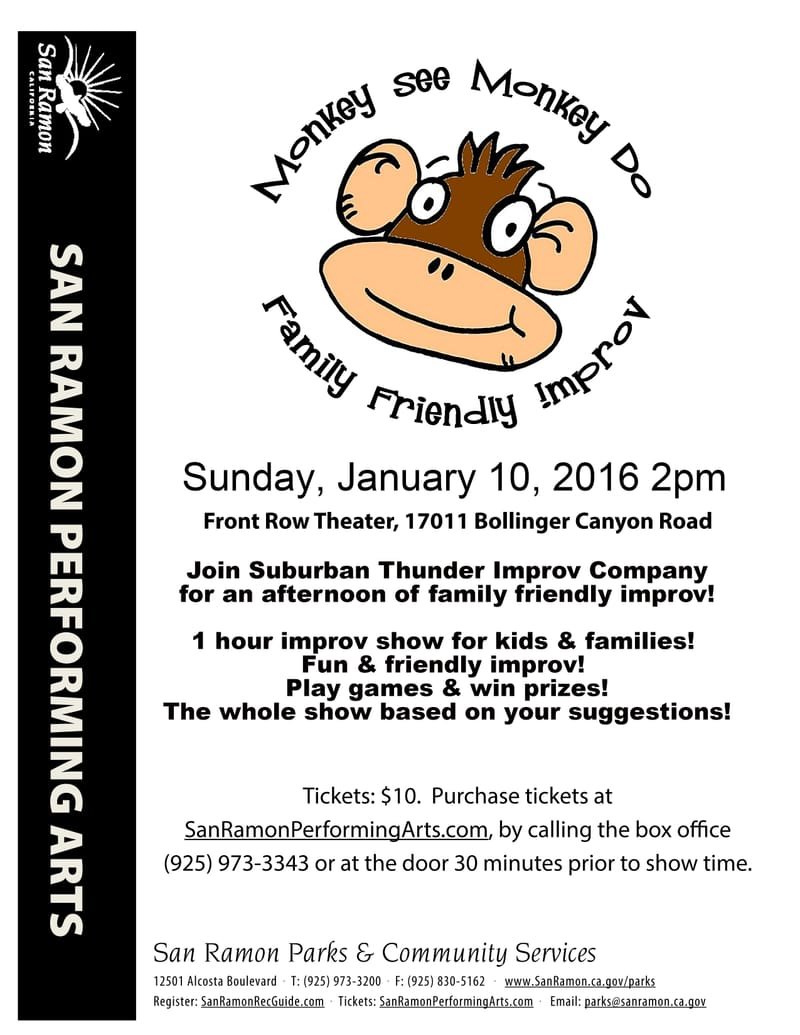 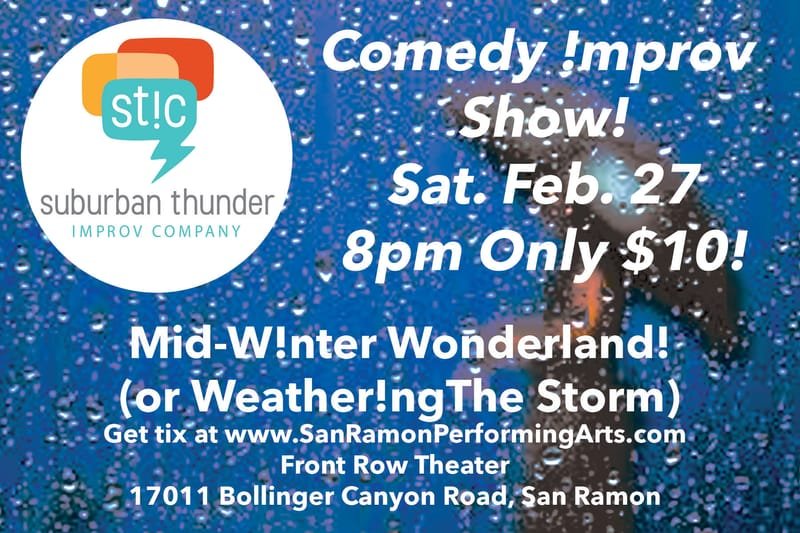 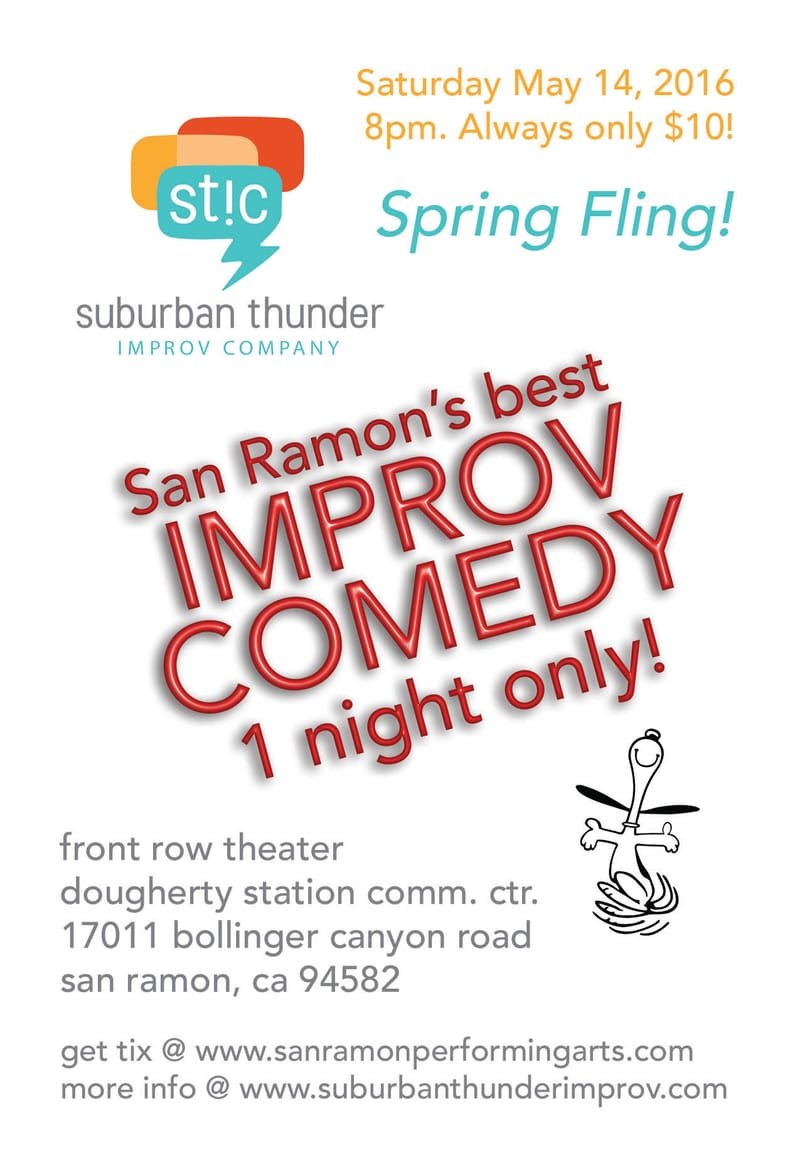 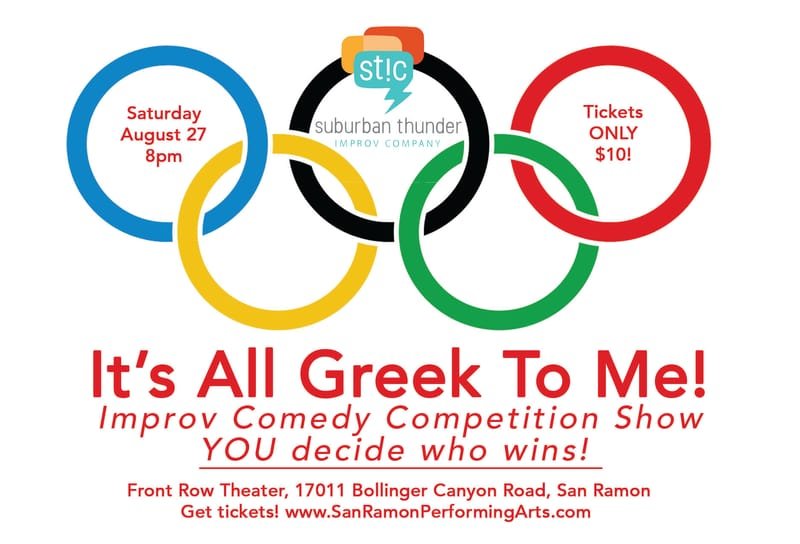 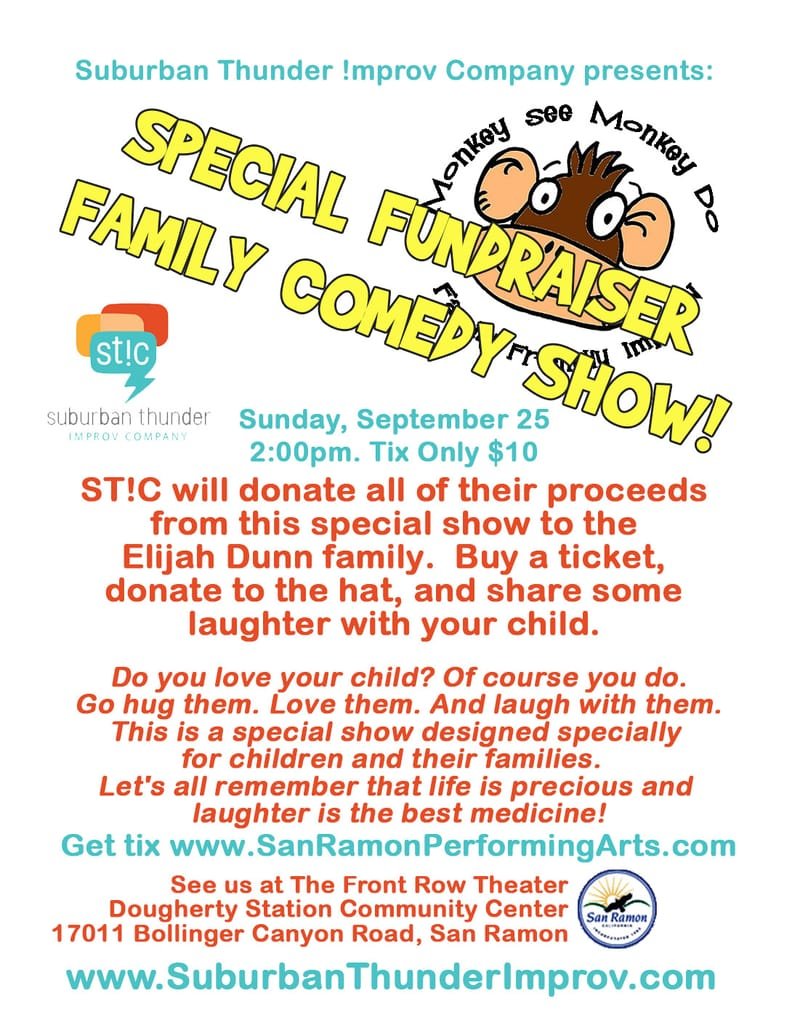 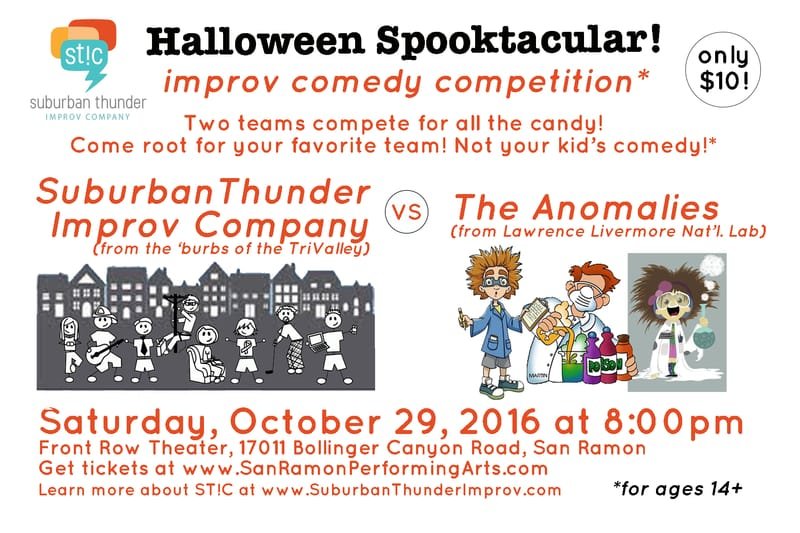 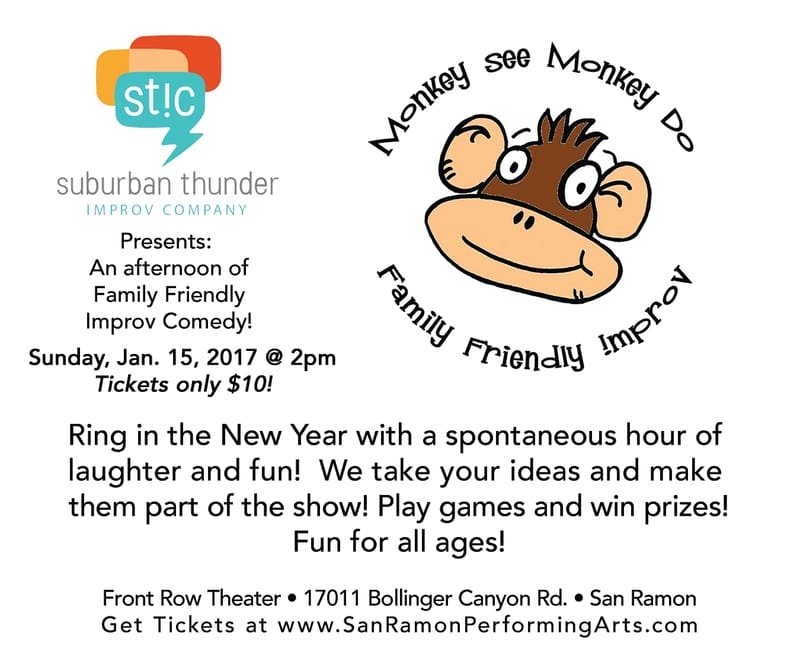 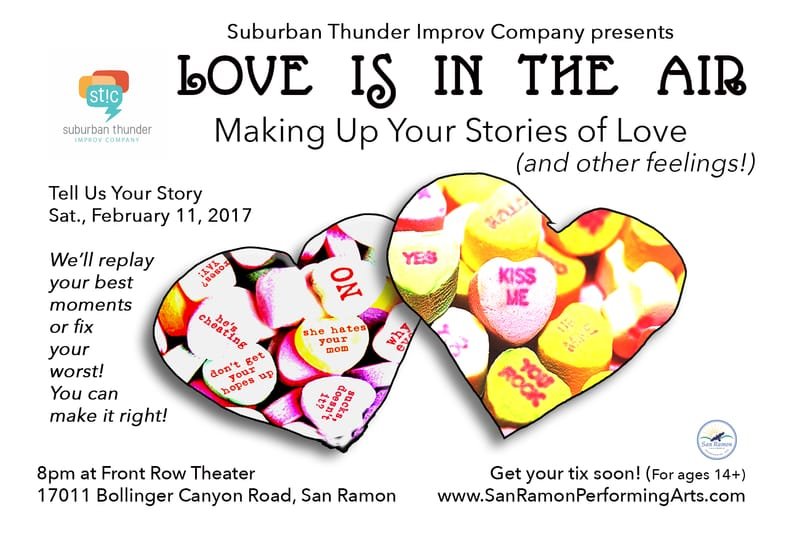 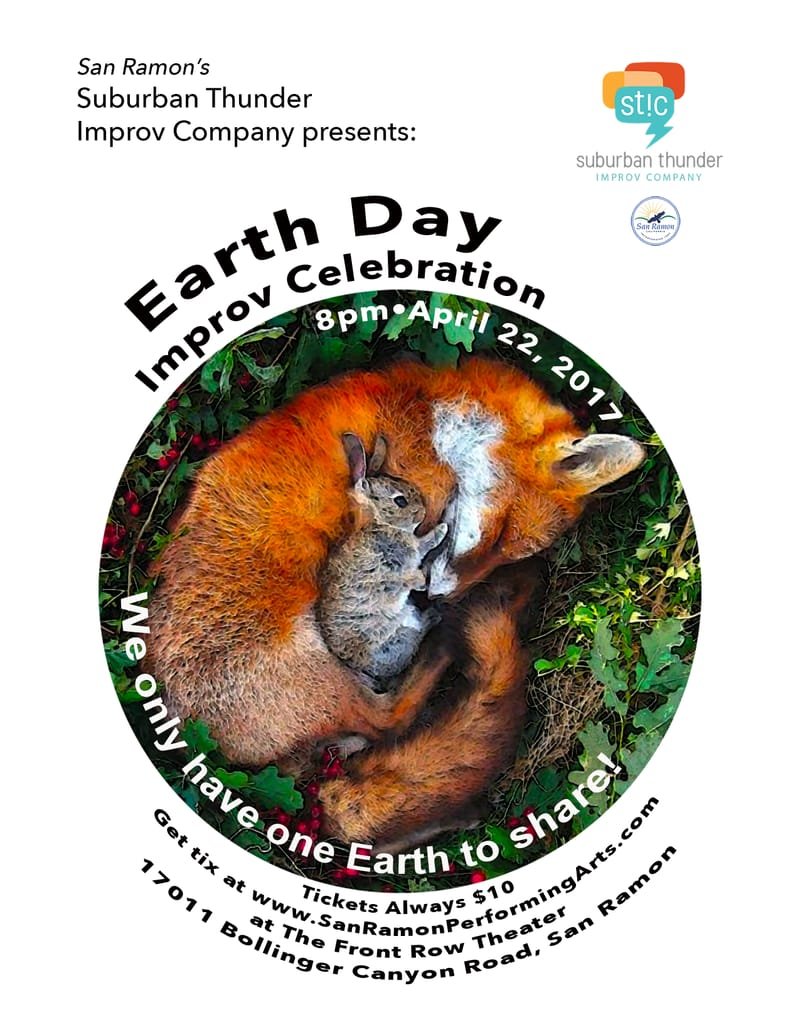 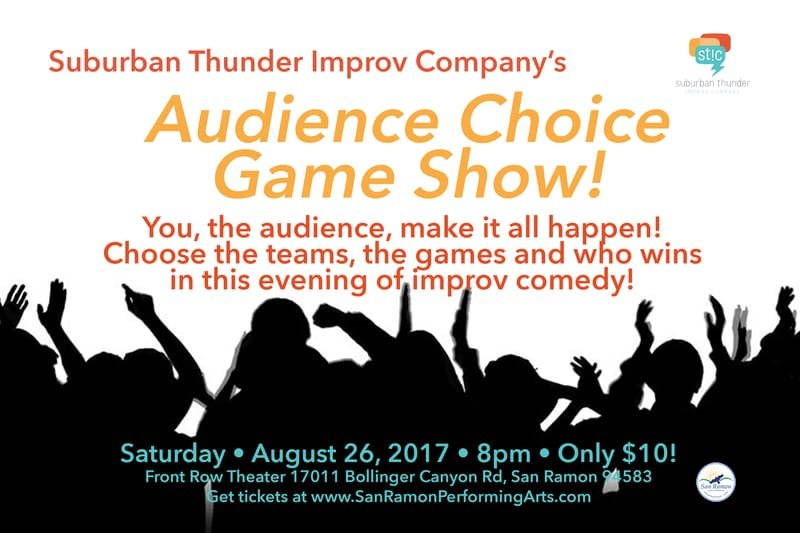 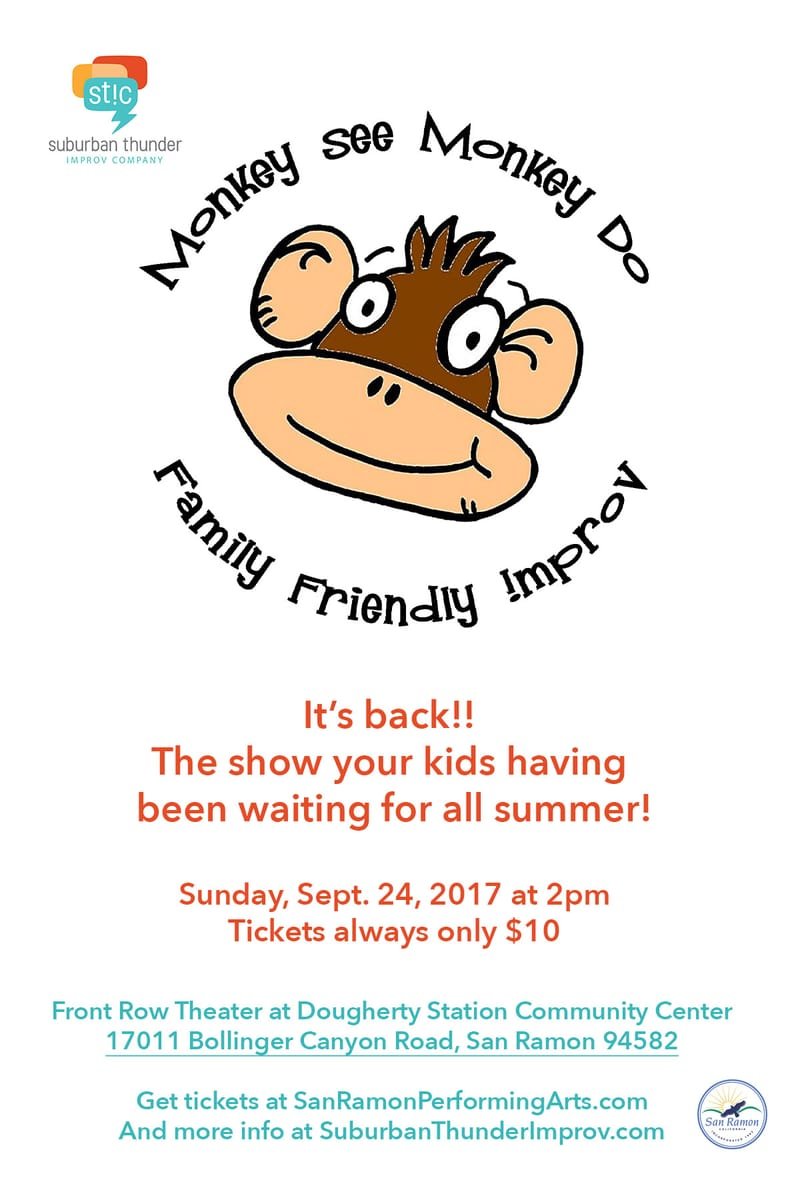 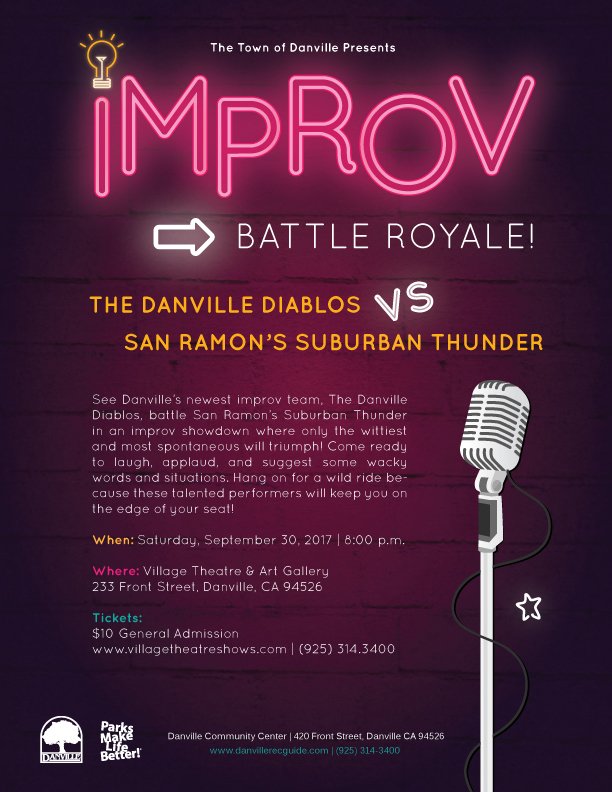 Suburban Thunder vs The Danville Diablos 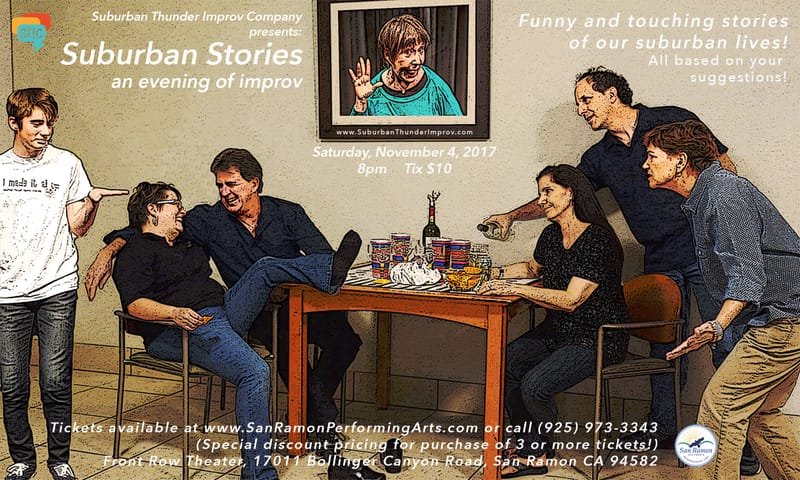 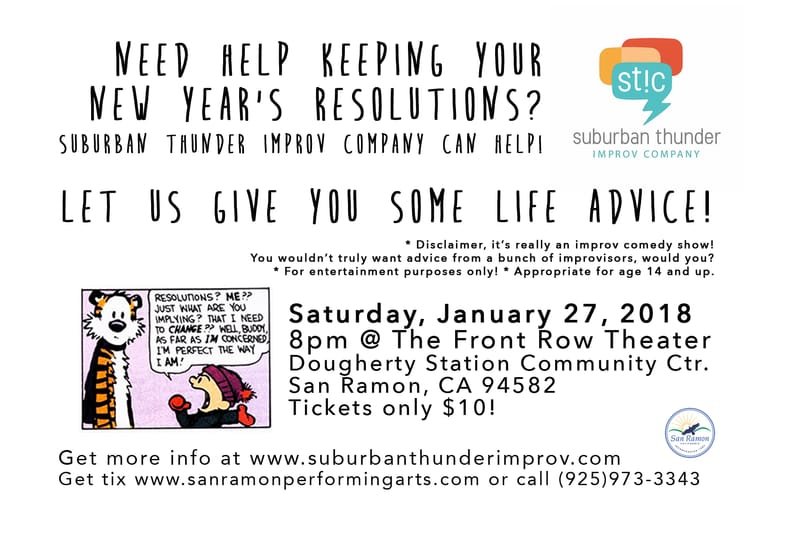 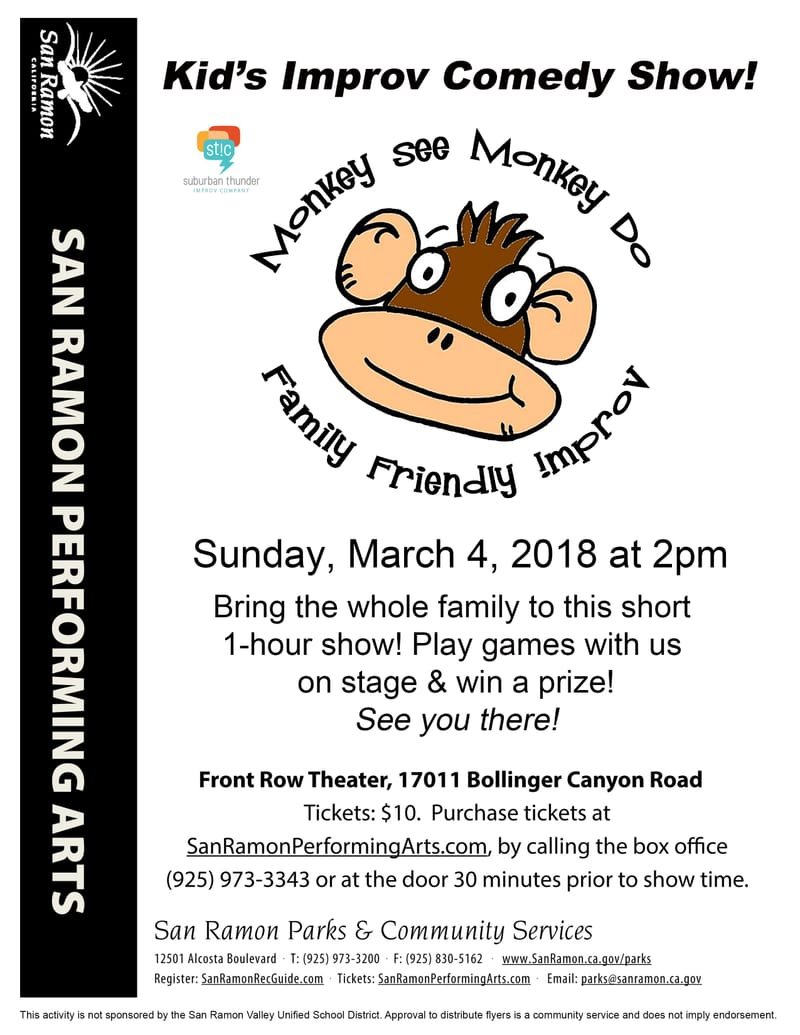 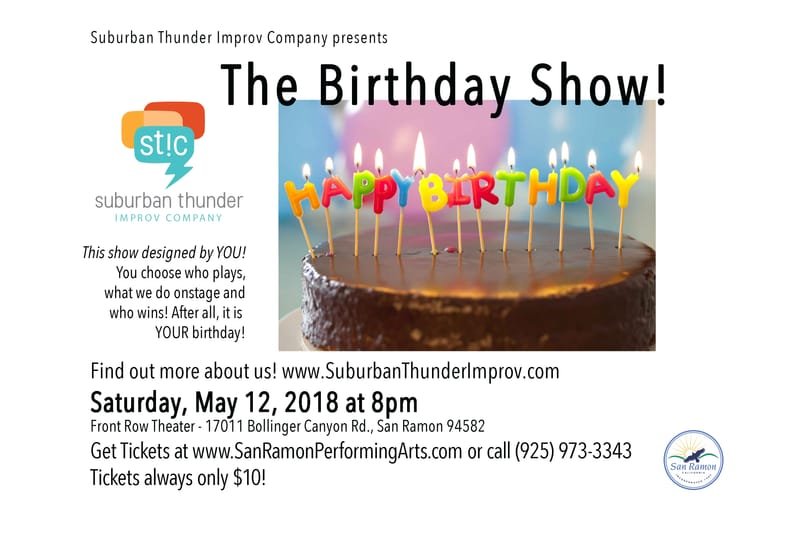 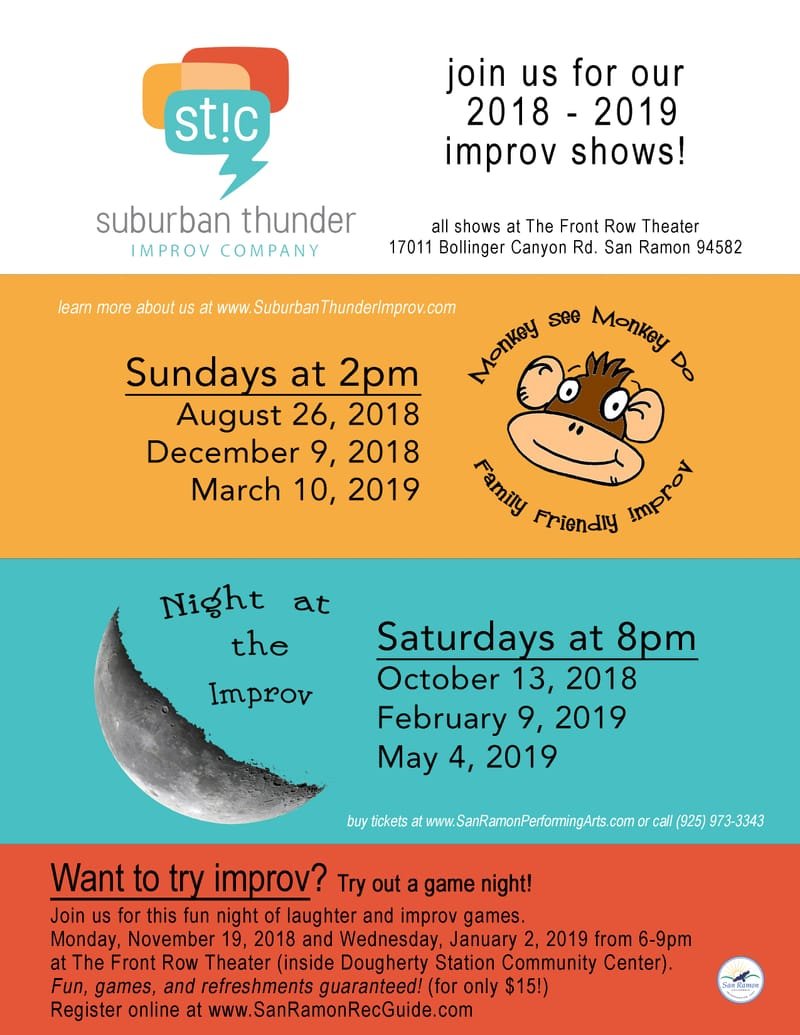 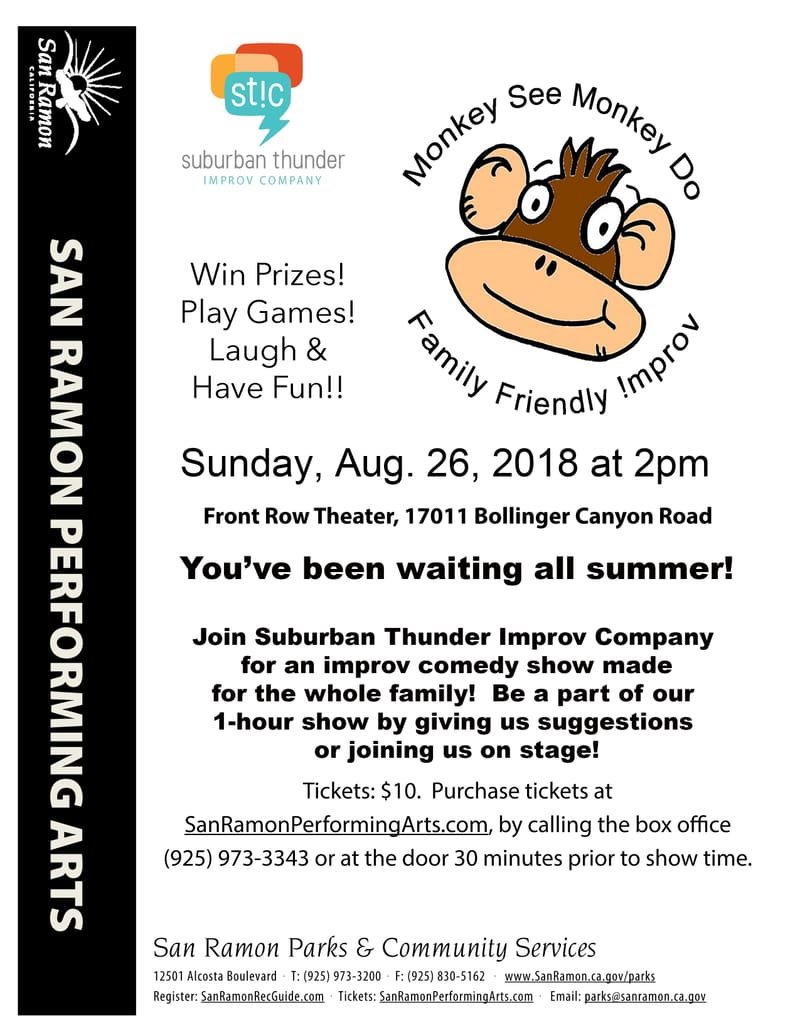 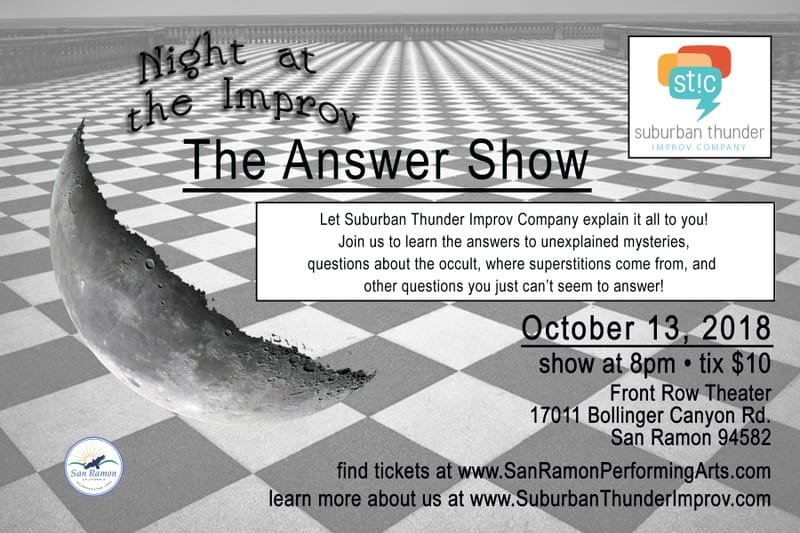 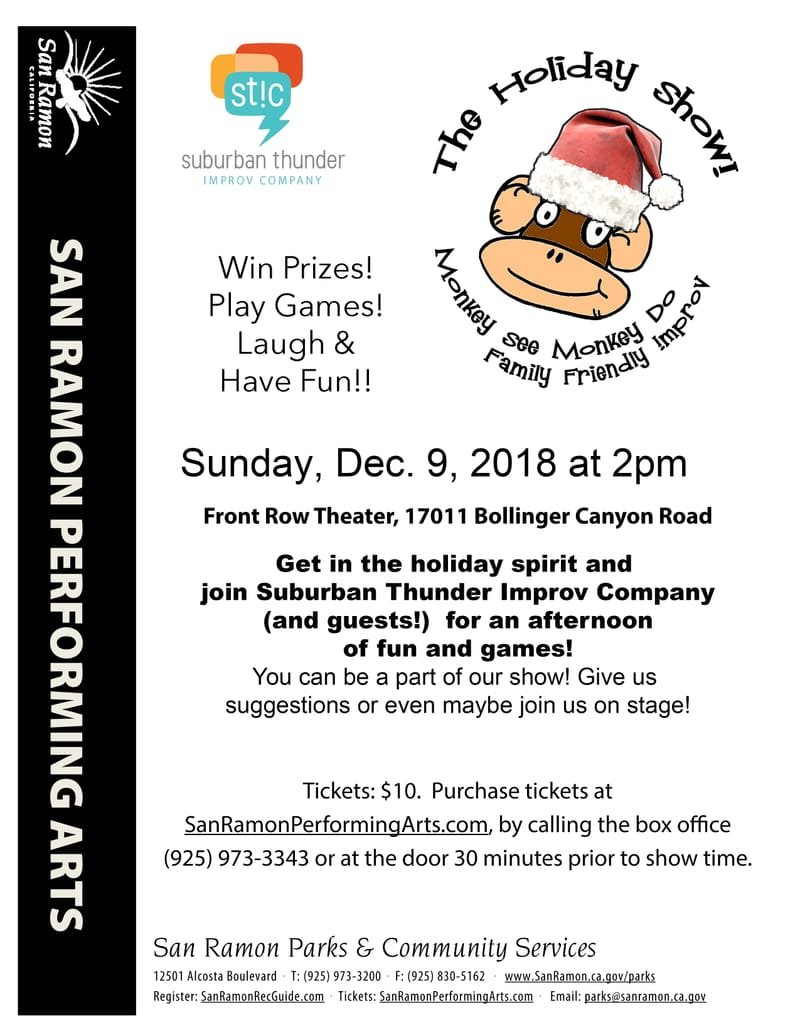 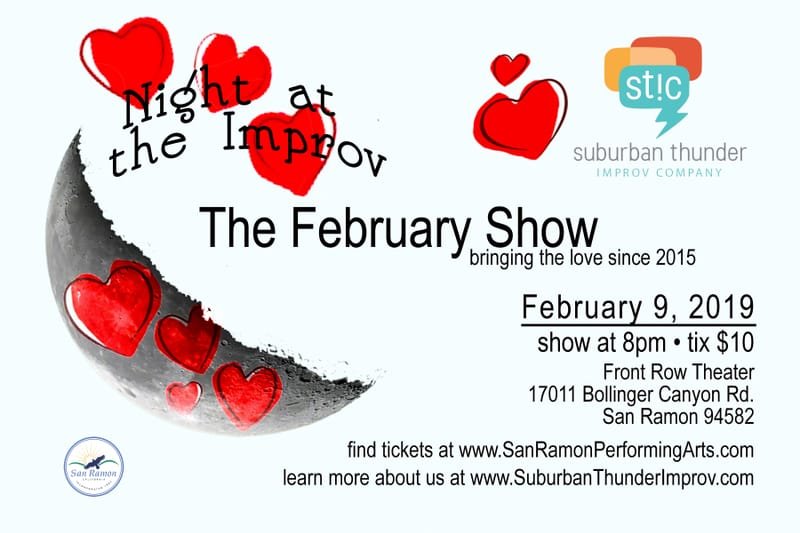 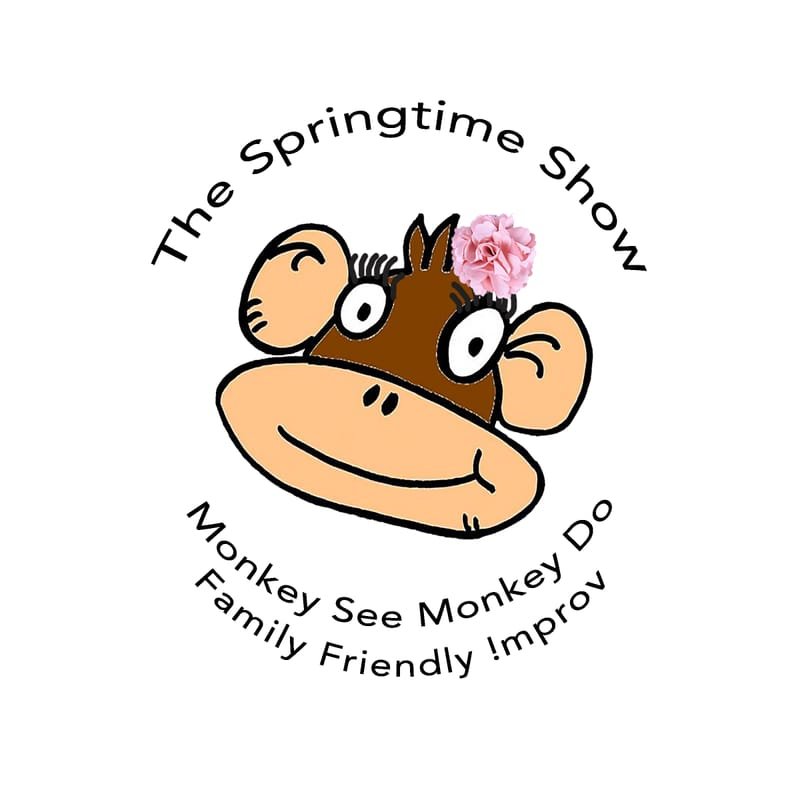 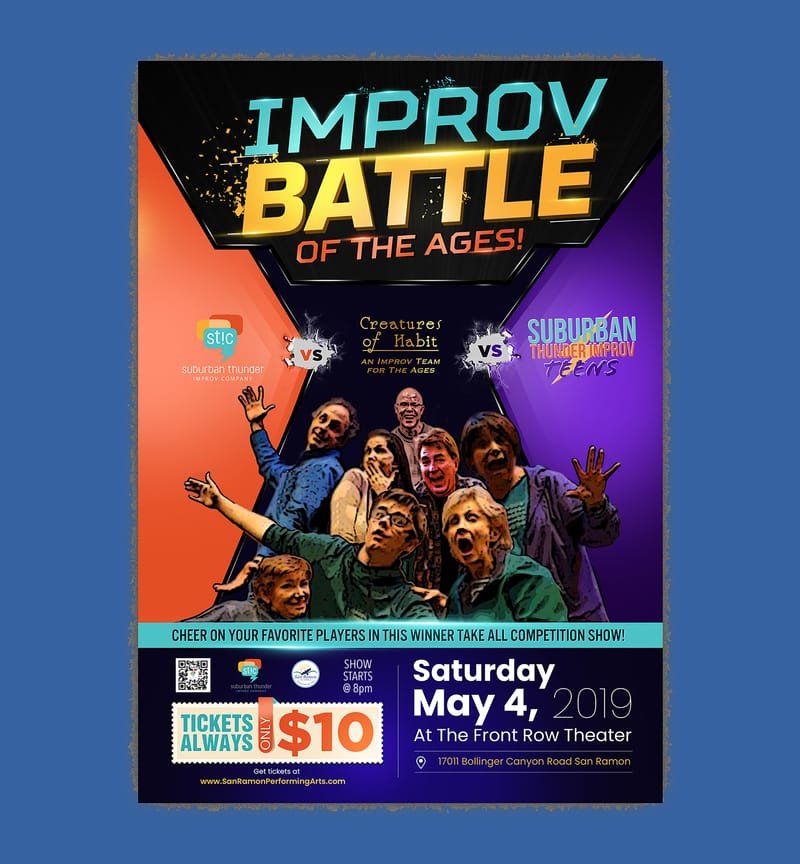 How do I get tickets for your show ?

Go to www.SanRamonPerformingArts.com and look for "tickets" in the menu. Then pull down "buy tickets". You'll see our shows in the scrolling list there. You can also call the box office (925) 973-3343. If you suddenly feel like having a laugh, just drop by the box office right before the show. Tickets are always $10! Best value for your buck!

Where do you perform?

Do you have a group discount price?

I need a team building session for my office. Can you come here for that?

Absolutely! We can tailor a session just for your team. We'll help you to better work together, really listen to each other, and trust your instincts. Let us build a class with your specific needs. Email us for more details. SuburbanThunderImprov@gmail.com

Can I bring my 8 year old to an evening show?

We do have an all age appropriate show on two Sundays in a season. That is the Monkey See, Monkey Do Family Friendly Improv Show. Your child will love this show! It's silly and funny and fast-paced and your little performer may be picked to play on stage with us!

A Short History of Improv

You may have seen "Who's Line Is It Anyway?" and wondered how they can make up all of those funny scenes.  Here is a brief history of modern improv.

Improvisational theatre is as old as time. It pre-dates the invention of writing, since long before we started writing scripts we were telling stories by acting them out. It has its basis in  commedia dell'arte, an Italian Renaissance form of theater in which a traveling comedy troupe would perform farces without a written script. Though the basic scenario was agreed upon, the dialogue and  the pacing of the story often depended on audience reactions.

After the Commedia died off, improv theatre faded into obscurity until it was separately and spontaneously re-invented by two people who have shaped the craft as it exists today -- Keith Johnstone and Viola Spolin.

Keith Johnstone started formulating his theories about creativity and spontaneity while growing up in England, and later brought them into his teaching at the University of Calgary. He felt that theatre had become pretentious, which is why the average man in the street didn't even consider attending it. Johnstone wanted to bring theatre to the people who went to sporting and boxing matches, the same audience that Shakespeare had written for in his day.

Johnstone decided that one approach would be to combine elements of both theatre and sports, to form a hybrid called Theatresports. The trappings of team sports were adapted to the improvisational theatre context; teams would compete for points awarded by judges, and audiences would be encouraged to cheer for good scenes and jeer the judges ("kill the umpire!").

Through Theatresports, Johnstone's ideas have gone on to influence (directly or indirectly) almost every major improv group.

Back in the 1920's and 1930's, a woman named Viola Spolin began to develop a new approach to the teaching of acting. It was based on the simple and powerful idea that children would enjoy learning the craft of acting if it were presented as a series of games.

Spolin's son, Paul Sills, built on his mother's work and was one of the driving forces of improvisational theatre centered around the University of Chicago in the mid-1950's. Along with people like Del Close and David Shepherd, Sills created an ensemble of actors who developed a kind of "modern Commedia" which would appeal to the average man in the street. As with Theatresports and the original Commedia, the goal was to create theatre that was accessible to everyone.

The group that sprang from the work of Sills, Shepherd and Close, called The Compass, was extremely successful. It brought people to the theatre who in many cases had never gone before, and eventually led to the development of a company called Second City.

Through The Compass and Second City, Spolin's Theatre Games have gone on to influence an entire generation of improvisational performers. 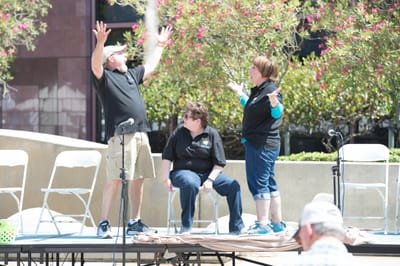